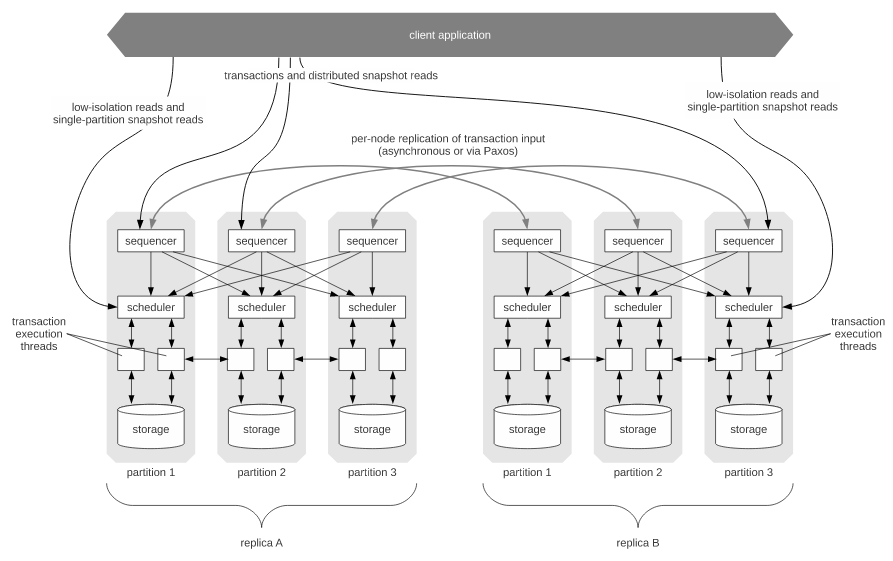 After reading Designing Data-Intensive Applications you certainly feel the need of going down to the sources to learn about the state of the art of the current limits of distributed systems.

One of the hardest problems within distributed systems is distributed transactions, and that’s why most of the NoSQL databases dropped many transactional guarantees, prioritizing scalability.

Calvin is designed to run alongside a non-transactional storage system, transforming it into a shared-nothing (near-)linearly scalable database system that provides high availability and full ACID transactions.

The key technical feature that allows for scalability in the face of distributed transactions is a deterministic locking mechanism that enables the elimination of distributed commit protocols.

The contention footprint (the total duration that a transaction holds its locks) of two-phase commit protocols is very high because locks must be held not only during the transaction execution but during the whole agreement protocol.

The solution: agreement outside transactional boundaries

When multiples nodes need to agree upon a transaction, they do it before the actual transaction and locking. Plans must be deterministic. Once they’ve agreed, the transaction must be executed to completion according to the plan:

On node failure, if a replica is performing the same operations, there’s no need to wait for the recovery of the failed one, so there’s no need for aborting because of nondeterministic events either.

For this to work, replicas need to maintain the same order of transactions to avoid divergence. This way replicas can be consistent just replicating database input.

Calvin divides time in 10-millisecond epochs. Sequencers collect transactions within the same epoch in batches. As the batch is replicated, a message is sent to the scheduler in every partition, containing:

Asynchronous mode: one replica (master) forwards immediately all transaction requests to sequencers at the same node, and when it compiles each batch it sends it to all other (slave) sequencers in its replication groups. This has extremely low latency at the cost of complexity in failover: on master failure, all sequencers at the same replica and its replication group must agree on the last valid batch sent and which transactions were at that batch (as sequencers only have a partial view).

Paxos-based synchronous mode: sequencers within a replication group agree on a combined batch of transaction requests.

Each node’s scheduler is responsible for locking records stored at that node’s storage component (even for transactions that access records stored on other nodes).

Following the same principle of “move as much as possible before the locks”, when a sequencer receives a request for a transaction that might be affected by disk stall, the transaction is delayed but the reads are sent so they’re brought from disk to memory (warm-up). Calvin seems to be surprisingly sensible to accuracy on disk I/O latency prediction.

Although Calvin doesn’t make initial assumptions about data storage structure, there’s some information about getting the most out of specific storage.

Another key element is replication through input and determinism, reducing coordination overhead.

The design strategy of rethinking two-phase commit by moving as much work as possible outside the transaction can be a big boost. Requiring transaction logic to be sent and analyzed in advance seems complex, but I’d like to give it a try in actual use cases. Although it requires a change in mindset over traditional session transactions, it might be a great optimization enabler.